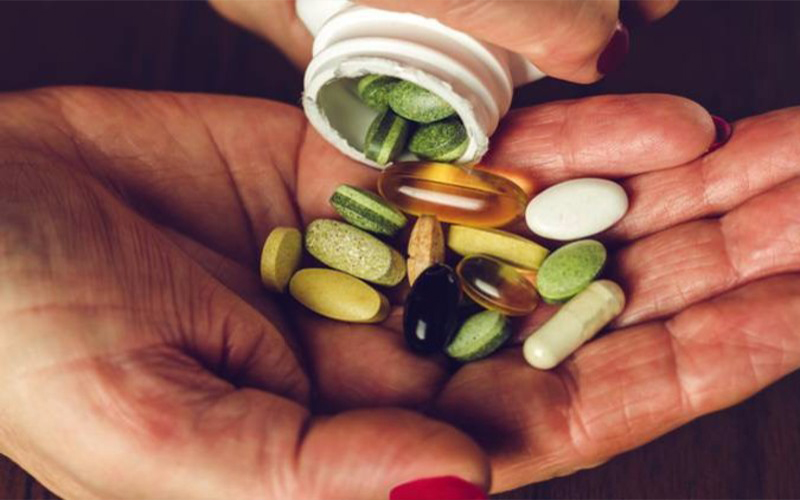 Essential fatty acids and amino acids are also required by the body and obtained from certain foods. Inadequate amounts of these important nutrients can lead to illness. In recent years, all of these essential nutrients have become available as a pill and can be found on almost any supermarket shelf. Specific foods are no longer the only source of vitamins, minerals, essential fatty acids, and essential amino acids. In addition to the required nutrients, many other nutritional supplements are now available on the supermarket shelf and/or over the internet.

The growing use and availability of nutritional supplements, along with numerous reports of their potential benefits, have gained the attention of the scientific community. Many of these products are now being being studied with the same rigor and scrutiny which has traditionally been applied to drugs and medications used to cure, treat, and/or prevent illness. In addition, the intake of large amounts or “mega” quantities of vitamins and other required nutritional elements is undergoing increased investigation, both for potential benefits and/or harm. For a valuable resource about nutritional supplements, their proposed benefits, and available research findings, refer to the nutritional supplements index at PDRhealth.com.

Use of Vitamins and Supplements: Children with ASDs

There are several reasons to suspect that children on the autism spectrum may not be getting sufficient nutrients, including chronic diarrhea or constipation, gastrointestinal inflammation, and a tendency to restrict food choices. In addition, the possibility exists that children with autism do not break down or process the nutrients they do consume in expected ways.

Mega-vitamin therapy and other nutritional supplements are commonly used to treat children with ASD. Recent studies show that over 30% of parents are giving their children extra Vitamins C and B6, and over 25% are using essential fatty acids and magnesium. Other nutritional supplements reported in use by more than 10% of parents include Vitamin A, mega-vitamin therapy (non-specific), DMG (dimethylglycine), and L-glutamine. The rationale for use and the expected benefits of many of these supplements vary, as does the evidence supporting them. In regards to maintaining a general state of good health, the use of a daily multi-vitamin is widely accepted and supported for children with ASD, especially given the self-restricted diets many of these children consume. Vitamin therapy and nutritional supplements beyond this, however, are not fully supported and need to be further studied.

Children with ASDs have not been found to suffer from a severe lack of Vitamin C. Any beneficial impact its use may have for children on the spectrum is therefore not due just to making up a vitamin deficiency. What, then, might its effect be? There are several possibilities. Vitamin C, also known as ascorbic acid, is believed to influence the functioning of the human body and brain in many ways, including regulation of cellular immune function; as an antioxidant; and via its impact on the neurotransmitter dopamine.

It is a fact that children with ASDs have been shown to suffer from increased oxidative stress in a number of studies. “Oxidative stress” occurs when molecules that do not have a balanced number of protons and electrons –called free radicals– “steal” an electron from another molecule to achieve balance and stability. Unfortunately, the molecule stolen from now becomes a free radical itself, and will go on to steal an electron from another molecule, and on and on, in what has been called “an electron-stealing frenzy.” To some degree, this constant exchange of electrons is natural, and the body can cope. When the process goes out of balance, however, antioxidants like Vitamin C help by “donating” electrons to molecules that lack one in a non-damaging way that stops the chain-reaction. The central nervous system, which includes the brain, is thought to be more sensitive to free radical attack than other systems in the body. It is therefore not surprising that “free radicals have been implicated in a variety of neuropsychiatric conditions.” In theory, children with autism suffering from “oxidative stress” might be helped by receiving Vitamin C or other antioxidants. No studies have yet been done to test this specific theory with regard to autism, however.

So far, only one double-blind, placebo-controlled study has explored the effectiveness of Vitamin C as a therapy for autism. It was specifically directed at Vitamin C’s involvement in the regulation of dopamine, a crucial neurotransmitter, and did indeed show a decrease in stereotypic behaviors. It was, however, a small study involving only 18 subjects, and its findings have not so far been replicated — that is, confirmed in another study. (To learn about evaluating research studies, see “Gold Standard of Evidence: The Randomized Controlled Trial.”)

More research is still needed to see if Vitamin C truly helps children with autism and, if so, through what mechanism.

Vitamin B6 and Magnesium Combined Therapy

The use of large doses of vitamin B6 (pyridoxine) was first reported to improve speech and language in children diagnosed with “autism syndrome” in the late 1960s. Over the next three decades, a variety of studies were conducted in attempts to show that children with autism significantly improved on a regimen of Vitamin B6 with magnesium. (Magnesium was added to counter negative side effects that can come with large doses of Vitamin B6, such as irritability, hypersensitivity to sound, and bed-wetting.) Most of these reported positive outcomes, and called for more research to be conducted. At least two studies found that children with autism had high levels of B6 in their blood — evidence that their bodies were not efficiently converting the vitamin, and providing a reason why more B6 might prove helpful.

Unfortunately, most of these studies were not conducted in an ideal way. They were either non-randomized, had no control group, were not “blind”, or were very small. Two more recent studies, which were randomized, double-blind, and placebo-controlled, suggested that B6 and magnesium did not have a statistically significant effect. Another, which focused on children with Asperger’s Syndrome and PDD-NOS, found Vitamin B6 appeared to increase verbal IQ scores, although it did not improve social functioning. In brief, results of various studies on the usefulness of Vitamin B6 and magnesium have been contradictory and confusing.

In 2006 the Cochrane Collaboration, an independent, not-for-profit, organization dedicated to producing and distributing high quality reviews of published clinical trials on a variety of treatments and disorders, published a complete review of suitable studies on the efficacy of vitamin B6 and magnesium for treating the core deficits of autism. Using strict guidelines for evaluating study design, only 3 clinical trials were deemed acceptable for inclusion in the review. Other studies were excluded because they were not being conducted in a way that met the standards set by the reviewers. The final conclusion of the Collaboration was that no recommendation could be given regarding the efficacy of vitamin B6-Magnesium as a treatment for autism. Enough high quality research has simply not been carried out.

Dimethylglycine (DMG) is not a vitamin, per se, but is sold as a nutritional supplement. It has been suggested that DMG is an immune enhancer in addition to being “metabolized in the liver, ultimately to glycine, an excitatory neurotransmitter.” Although DMG has been widely used to treat children with ASDs, the two double-blind, placebo controlled studies conducted to test it did not show it to be effective. These were very small studies, however. Considering the large numbers of parents treating their children with DMG, and the repeated claims of effectiveness (especially in the areas of speech and behavior) made in the parent-advocacy literature over a great many years, more research is warranted.

Essential fatty acids, which make up about 20% of the dry-weight of the brain, are now believed to be crucial to the brain’s optimal functioning. Called “essential” because they cannot be manufactured by the body, but must be acquired through the diet, these fatty acids have a major influence on a variety of biochemical processes involving the neurons, or nerve cells, in the brain. They can therefore impact both thought processes and behavior. In addition, they are believed to help modulate the immune system — an interesting fact, considering that we now know some kind of immune dysfunction may well be involved in autism.

There are two key essential fatty acids: Omega-3 and Omega-6. Our modern diet, especially in the United States, is thought to include far too many Omega-6 containing foods, and far too few foods containing Omega-3s. (Omega-3s come mainly from fish oil — not a big item in the Western diet.) One researcher has written that humans evolved eating a diet where the ratio of Omega-6 to Omega-3 was one to one, that is, for every Omega 6 people ate, they ate one Omega 3. Omega-6 and Omega-3 were in balance. In modern diets, in contrast, we are eating somewhere between 11 and 15 Omega-6s for every Omega-3.

Researchers have shown in recent years that deficiencies in Omega 3 fatty acids may be linked to aggression, impulsivity, ADHD, and schizophrenia. They may also be linked to Autism Spectrum Disorders (ASDs). For one thing, symptoms of fatty acid deficiency — such as excessive thirst and constant drinking, dry skin, dry hair, dandruff, and soft and brittle nails — have been documented in ASDs. For another, at least one study has shown that children with autism, when compared to mentally retarded children without autism, had significantly lower levels of Omega-3.

Indeed, looking at mental illness and developmental disorders as a whole, scientists have begun to theorize that there may be some fundamental link between a lack of essential fatty acids and a variety of neuropsychiatric conditions, including the Autism Spectrum Disorders. One group of researchers noted, for example, that the effects of a fatty acid deficiency could partially explain the fact that there is a higher prevalence of ADHD in males than females because males are more vulnerable than females to certain fatty acid deficiencies. They also noted that individuals with ADHD often have sleep problems, allergies, emotional and mood disorders, motor coordination problems, and learning disabilities. It is interesting to consider that, in the Autism Spectrum Disorders, males also far outnumber females, and that many individuals with ASDs also experience the other challenges identified. Could there be one unified explanation for these and other disorders?

Researchers are taking on the issue, especially with an eye to treatment. Can supplementing the diet with essential fatty acids — which would be fairly easy and inexpensive to do — improve the condition of individuals with ASDs? For now, studies are few and very small. One randomized, double-blind, placebo-controlled pilot study recently demonstrated that children with autism receiving an Omega-3 supplement showed improvement, especially in hyperactivity and repetitive behaviors (Please note, however, that this study involved only thirteen children). Another small study showed that parents of children with ASDs who took fish oil supplements for six months reported improved cognitive and motor skills, concentration, eye contact, sociability, and sleep, as well as reduced hyperactivity and aggression. A few, however, reported an increase of hyperactivity and behavioral problems.

Clearly, this is an area where more extensive research is called for.